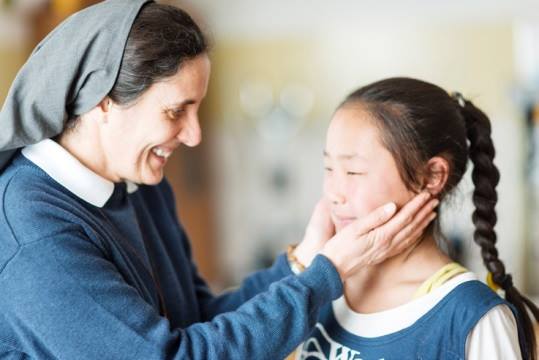 Today we celebrate the life of the first American-born saint: Elizabeth Ann Bayley Seton. The daughter of a prosperous New York family, she was raised in the Episcopal tradition and from an early age was drawn to a love of prayer, the Scriptures, and service to others.

In 1794, at age 19, she married William Seton, a wealthy businessman and within a decade they had five children. But during this period both his health and his business declined. After her husband’s death, Elizabeth was drawn to the Catholic Church while spending time with friends in Italy. Despite strong anti-Catholicism in America at that time, she became joined the Church. Abandoned by family and friends, she and her children traveled to Baltimore at the invitation of a priest who wanted her to start a school. Like those Apostles called to follow Jesus, Elizabeth Seton began a new life dedicated to the will of God, wherever and whatever He asked of her. “John was standing with two of his disciples, and as he watched Jesus walk by, he said, ‘Behold, the Lamb of God.’ The two disciples heard what he said and followed Jesus” (John 1:35-37).

In addition to starting the Sisters of Charity, the first religious order for women, St. Elizabeth opened the first parish school and the first Catholic home for orphaned children in the United States. While enduring hardships as both a mother and mother superior, Mother Seton had an immense influence on the American Catholic Church. She worked continuously to help those in need both materially and spiritually. She died at when she was 46. St. Elizabeth Ann Seton was canonized in 1975 and is patron of both Catholic schools and of widows.