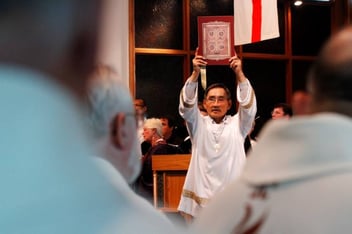 They introduced others to Christ despite the dangers...

Six French Jesuit priests and two lay missionaries who worked with them were martyred in the 1640s and are collectively honored as the North American Martyrs.

They all worked among the Huron under extremely difficult circumstances. St. John de Brebeuf arrived in Canada in 1625. He learned their language and taught it to other missionaries. He also translated a catechism and wrote a dictionary of Huron words. St. Isaac Jogues was captured by Iroquois enemies of the Huron and kept as a slave until he was rescued and returned to France. Yet, he was determined to return to his mission. Despite having lost several fingers during torture, he received permission to offer Mass from Pope Urban VIII, who said, “It would be shameful that a martyr of Christ be not allowed to drink the Blood of Christ.”

In the Gospel for this Memorial, we hear the words of Jesus just before His Ascension. He directed His disciples, “All power on heaven and earth has been given to Me. Go, therefore, and make disciples of all nations… teaching them to observe all I have commanded you. And behold, I am with you always, until the end of the age” (Matthew 28:18-20). Each of these eight men suffered greatly in order to follow the command of our Lord to bring His message of salvation to every corner of the earth.