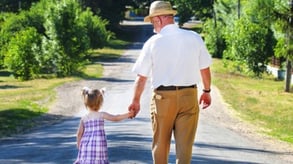 In today’s difficult times, we have come to value a simple touch and – when the danger is finally over – we should treasure it even more.

Today’s Gospel introduces us to a leper who found in Jesus an immense compassion that must have stunned him as well as all the on-lookers. “A leper came to Jesus and kneeling down begged Him and said, ‘If you wish, You can make me clean.’ Moved with pity, he stretched out His hand, touched him, and He said to him, ‘I do will it. Be made clean.’ The leprosy left him immediately, and he was made clean” (Mark 1:40-42). Whether the leper stood outside a synagogue and found hope in Christ’s words or he had learned about the healings that Christ had performed from others, he knew he had to ask His help. Humbly kneeling before our Lord, the man asks for healing. But first he acknowledges that it is up to Jesus to do so – or not. What must have surprised both the leper and the crowd was not only the healing of the man, but the fact that Christ touched him. This is the last thing that anyone would willingly do to a person with leprosy. That touch meant risking the contagion of a terrible disease that put a leper beyond contact with others. More than just the physical ailment, it resulted in social and even religious ostracism since it was generally believed this disease was a dreadful judgment from God because the person had sinned.

When Jesus replied to the man that He would make him clean, He expressed His will and desire to give the man back a life that had probably been denied to him for years, perhaps decades. Christ had seen in this man a true faith in His power to transform his suffering and also a gracious humility. He left the decision in Jesus’ hands– and with His hand He reclaimed that man’s life. We cannot know how the townspeople or even Jesus’ own disciples responded. Surely they were amazed at the miracle of the cure. But they may have been equally amazed by the touch. This is something so ordinary, so human, unless it is forbidden by serious circumstances. In today’s difficult times, we have come to value a simple touch and – when the danger is finally over – we should treasure it even more. In the meantime, let us continue to care for and support the well being of others by whatever safe and reasonable means we can.