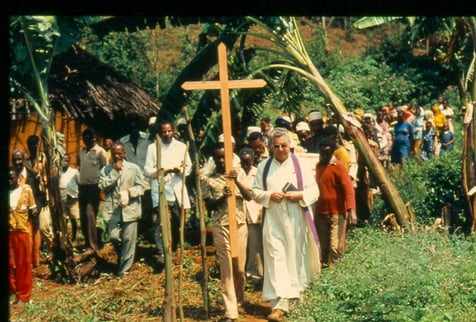 This is the feast of the North American Martyrs who laid down their lives in sharing the word of God with the native Canadian and American people.

Most were French Jesuit priests, the others were lay missionaries associated with them. They worked with some success among the Huron of Northern New York and Quebec and Father Brebeuf learned their language well enough to write a catechism for them. But the missionaries were distrusted by many of the Iroquois who thought the “Blackrobes” were responsible for various diseases and other difficulties. Father Jogues was captured, brutalized, and finally escaped – yet he returned from France to continue his efforts. During the 1640s they were all martyred, usually proceeded by torture. They were canonized in 1930.

In the Gospel for today we hear Jesus tell this disciples, “I tell you, My friends, do not be afraid of those who kill the body but after that can do no more.… Are not five sparrows sold for two small coins? Yet not one of them has escaped the notice of God.… Do not be afraid. You are worth more than many sparrows” (Luke 12:4, 6, 7). Communicating our belief in the Son of God is not only part of our tradition, but also of our whole Christian way of life. Most of us will never have to face persecution, yet many followers of Jesus around the world are doing just that right now. Let us pray for them and unite with them by spreading the Good News through our prayers, words and actions. And let us ask God to make us people of courage, starting right where we are.

Be a voice for mission with MISSIO.
Access resources for your parish and/or school.