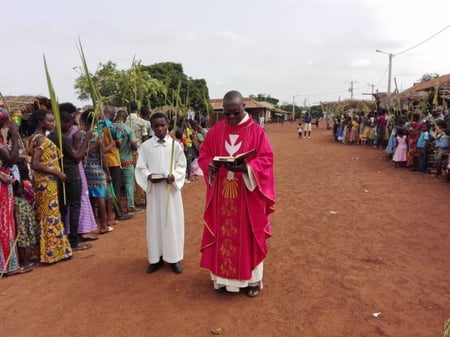 In the readings from the Gospel according to Luke, we hear Jesus referred to several times as King, but in very different ways.

First we hear about His triumphal entry into Jerusalem that we celebrate on this Palm Sunday. Crowds of people cheered as our Lord rode into the city on the back of a colt. They even threw their cloaks on the road in front of Him and called out, praising God. “They proclaimed: ‘Blessed is the king who comes in the name of the Lord’” (Luke 19:38) For all His sermons and miracles, Jesus never wanted public displays simply for the sake of calling attention to Himself. But this day is different. This is His last time entering Jerusalem and this is the last week of His life on earth. So, for a little while, the people honor and hail Jesus as king. These probably include some of the same people who will soon demand His death.

In a few days, Christ will eat His last Passover meal with His Apostles, sharing with them the Body and Blood that He will give up for them and all people the next day. He is soon arrested and taken before the Jewish authority, the Sanhedrin, and then to the Roman authority, Pontius Pilate. The religious leaders bring charges against Jesus. “‘(He) maintains that He is the Christ, a king.’ Pilate asked Him, “Are You the king of the Jews?’ He said to him in reply, ‘You say so’” (Luke 23:2-3). Whoever he thought our Lord to be, Pilate was far more concerned with his own reputation, career, and power, and that meant stopping any opposition to him or to the supremacy of Rome. So Jesus was condemned and crucified. While He was hanging on the cross, the crowd, including the soldiers executing Him, mocked our Lord and “called out, ‘If you are King of the Jews, save Yourself.’ Above Him there was an inscription that read, ‘This is the King of the Jews’” (Luke 23:37-38). Jesus sacrificed His life for ours. He was given indescribable suffering and a brutal death, and He gave us life everlasting.  Christ the King, who preached the coming of the Kingdom of heaven, loves us that much and more.