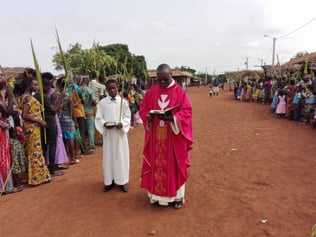 Masses celebrated on Palm Sunday usually begin with a procession and at this time we hear the words of the Gospel describing Jesus final entry into Jerusalem.

During visits there in the early days of His ministry, our Lord and His disciples probably attracted little attention. But as His fame spread, more and more people must have stared and pointed Him out to others. After all, Jesus was a preacher with a message worth hearing, a message of mercy and hope. And many must have witnessed His miracles, healing those who were desperately afflicted. They might even have been among those thousands who ate the bread and fish He had wondrously multiplied. But today we hear that Jesus realized this time was a special moment. He told two disciples to bring Him an ass and a colt in order to fulfill Old Testament prophecies. So Christ rode into the city and people excitedly threw their cloaks and tree branches in His path to honor Him. “The crowds preceding Him and those following kept crying out and saying: ‘Hosanna to the Son of David: blessed is He who comes in the name of the Lord; hosanna in the highest.’ And when He entered Jerusalem the whole city was shaken and asked, ‘Who is this?’ And the crowds replied, ‘This is Jesus the prophet, from Nazareth in Galilee’” (Matthew 21:9-11).

Today we need to consider how we identify with these people. Most were average, everyday people going about their business and living their faith as well as they could. A number of those in that raucous crowd who had come to the city to celebrate the Passover must have wondered if they were really looking at the Messiah. Many were simply caught up in the moment. But there is little doubt that some of those people who acclaimed Him were also among those who called for the death of Jesus of Nazareth just a few days later. Let us think about what we would have believed and what we would have done. And, more importantly, what we truly believe and what we will do with our own lives today.