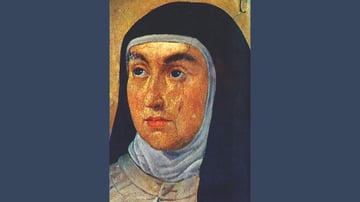 Today we honor St. Teresa of Avila, the great reformer of the Carmelite order. Born in Spain in 1515 to a well-to-do family, she was educated by religious Sisters and by her late teens decided to enter the local Carmelite convent. The first years of her religious life were largely unremarkable. At one point she became ill and almost died. Later, she began to have mystical experiences, including visions of Jesus Christ and the Blessed Virgin Mary. Recognizing her own spiritual failings as well as the general laxity of her community, Teresa determined to guide her order in returning to the more austere life of poverty and simplicity from which it had drifted. Over the final 20 years of her life, she traveled throughout Spain and founded a number of reformed convents of these stricter Discalced Carmelites. During this time, St. Teresa also wrote extensively, including influential works that are still read and respected today.

St. Teresa died in 1582 and was canonized 40 years later. She was named the first woman Doctor of the Church in 1970. During her lifetime, she was recognized as a woman of prayer and complete dependence on God. Intelligent, brave and outgoing, St. Teresa suffered from several physical ailments. In addition, she experienced the mental and emotional anguish of being misjudged and opposed for her efforts to transform her order during the difficult years of the Church’s Counter-Reformation. Here final words show her immense dedication and complete trust in Christ: “My Lord, it is time to move on. Well then, may Your will be done. O my Lord and my Spouse, the hour that I have longed for has come. It is time to meet one another.”