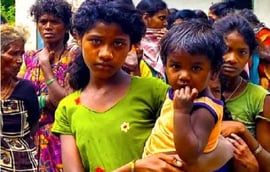 Let our ‘love for one another be intense’

"As each one has received a gift, use it to serve one another as good stewards of God’s varied grace. Whoever preaches, let it be with the words of God; whoever serves, let it be with the strength that God supplies, so that in all things God may be glorified through Jesus Christ, to whom belong glory and dominion forever and ever. Amen." (1 Peter 4:10-11)

Today we honor St. Patrick the great missionary to Ireland. Born in Britain about AD 389, he was captured by pirates as a teen and taken to Ireland where he was sold into slavery. He labored as a shepherd and, while enduring hunger and cold, his faith and love for God intensified. Patrick managed to escape when he was about 20 years of age. According to some reports, he had a vision calling him to convert the Irish people. He determined to be a priest and studied in France for a number of years, eventually becoming a bishop. He returned to the land where he was once a slave in order to spread the liberation of Christ’s message of mercy. While he endured many hardships over the years, Patrick achieved great success in turning the people to the Son of God. He established many monasteries for men and for women, churches, and different dioceses. A number of miracles have been attributed to him. It is generally believed that St. Patrick died on this date in AD 461 and is buried in County Down in Northern Ireland.

In the first reading today, we hear from St. Peter who introduced the Good News to thousands following the death, Resurrection and Ascension of Jesus. St. Patrick would certainly have valued his advice for the new Christians of his own age: “Let your love for one another be intense, because love covers a multitude of sins.… As each one has received a gift, use it to serve one another as good stewards of God’s varied grace. Whoever preaches, let it be with the words of God…so that in all things God may be glorified in Christ Jesus” (1 Peter 4:8, 10-11). While Patrick himself no doubt experienced discouragement both while he was a young captive and later a missionary, he believed in God and loved God’s people. St. Patrick entrusted his life to the Divine will as he served the Lord and brought His children to the gift of faith and hope of salvation in Him. Let our “love for one another be intense” also – in service to our Redeemer and for the well being of our brothers and sisters.