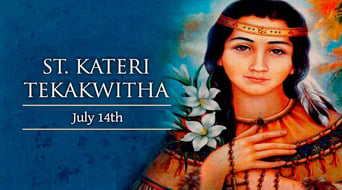 Drawn to a love of Christ, a desire to serve Him

St. Kateri was known among the other Native American Christians there for her outstanding piety...

St. Kateri Tekakwitha is the first Native American to become a Catholic saint. She was born near the town now known as Auriesville in northern New York in 1656. This was only a decade after two of the North American Martyrs, Jesuit Saints Isaac Jogues and John de LeLande were killed there. Her mother was an Algonquin who became a Christian and her father a Mohawk chief. They and her baby brother died a few years later during a smallpox epidemic. Tekakwitha also suffered from the disease that left her partially blind and her face disfigured by scars. From her early years, the teaching of the priests she met attracted her, but her family opposed her conversion as well as her decision not to marry. From then on, she was treated like a slave. Taking the baptismal name Kateri, or Catherine, she was received into the Church at age 19. Because of the great difficulties she faced, a priest encouraged her to go to a Jesuit mission near Montreal even though it meant walking two hundred miles. She remained there for the rest of her life.

St. Kateri was known among the other Native American Christians there for her outstanding piety, including prayer, penance, and acts of charity. She also made a public vow of virginity. She said, “I can have no other spouse but Jesus Christ. I have considered myself content to live in poverty and misery for His love.” In spring of 1680, her frail health broke down and she died during Holy Week. She was declared venerable in 1943 and canonized in 2012. She is a patron of Native Americans and of the environment.