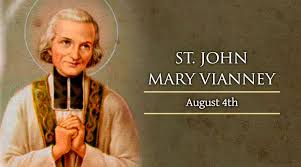 St. John practiced penance, eating and sleeping little. He was devoted to the Holy Eucharist and to the Blessed Virgin Mary.

Today we honor St. John Vianney, the patron of priests. He was born in France in 1786 and knew from an early age that he wanted to be a priest. He had struggles with his schooling, especially Latin, but was ordained when he was 29. After a few years, he was sent to the village of Ars where he lived and worked for the welfare of his parishioners for the rest of his life. Realizing that many there had become indifferent during the years of anticlericalism in France, St. John Vianney dedicated himself to educating them about their faith and drawing them closer to Christ. He became known as a wise confessor with a gift for seeing souls and bringing them back to God and the Church. Over time, people from across Europe traveled to seek his remarkable spiritual aid during the Sacrament of reconciliation, and he often stayed up to 16 hours a day in the confessional.

St. John practiced penance, eating and sleeping little. He was devoted to the Holy Eucharist and to the Blessed Virgin Mary. His service to God and the people whose cared had been entrusted to him guided his entire priesthood. In the Gospel reading today, we hear how Jesus walked on water. “During the fourth watch of the night, He came toward them, walking on the sea. When the disciples saw Him walking on the sea they were terrified. ‘It is a ghost,’ they said, and they cried out in fear. At once Jesus spoke to them, ‘Take courage, it is I; do not be afraid’” (Matthew 14:25-27). St. John Vianney listened to and took to heart our Lord’s words. In addition to his faith and compassion, he had courage in doing all Christ asked of him. Relying on Divine grace, he humbly and patiently went about his tasks and directed the souls of many men, women, and children in the way of the Lord. He died in 1859.