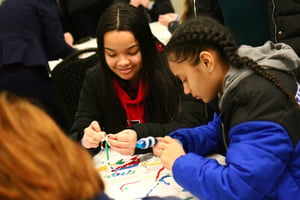 St. John Neumann served God as a missionary to the people of America in a time of many hardships and prejudices

“When Jesus saw the vast crowd, His heart was moved with pity for them, for they were like sheep without a shepherd; and He began to teach them many things” (Mark 6:34).

On this day we celebrate the life and legacy of St. John Neumann, the first American bishop and first male citizen of this country to be canonized. Born in what is now the Czech Republic, he entered the seminary to fulfill his dream of becoming a priest where he was a good student and learned several languages. However, at that time there were so many priests, that the bishop postponed any ordinations. John Neumann headed to New York where he hoped to become a missionary. He was ordained in 1836 and worked in upstate New York for several years before joining the Redemptorist Fathers. He worked in several parishes in Ohio, Maryland and Pennsylvania before being appointed bishop of Philadelphia in 1852. He certainly labored to fulfill the message in today’s Gospel reading: “When Jesus saw the vast crowd, His heart was moved with pity for them, for they were like sheep without a shepherd; and He began to teach them many things” (Mark 6:34). The number of immigrants from various countries into American cities continued to increase, and so did a nativist movement. This gave rise to the Know-Nothing political party that was particularly strong in Philadelphia and known for its anti-immigrant and anti-Catholic bias. Bishop Neumann stood up to these difficult concerns while administering his diocese. He also created a number of new parishes, organized parish schools within a diocesan framework, and invited a number of religious orders to meet the education and other services needed by the city’s Catholics, especially among the poor.

His personal poverty, humility and hands-on service to his people impressed many with his holiness. Bishop Neumann was deeply interested in the spiritual welfare of everyone, saying that, “Though God hates sin more than any other thing, He loves us poor miserable sinners. He ardently desires the welfare of our souls as if His own happiness depended on it.” He died on this date in 1860 at age 48. St. John Neumann was canonized in 1977.