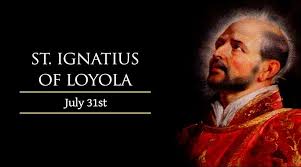 The feast day of the founder of the Society of Jesus

The order, which pledged most particular loyalty to the Pope, received Church approval in 1540.

Today we celebrate Ignatius of Loyola, a town in the Basque region of Spain where the saint was born to a noble family in 1491. He sought and enjoyed a military career for about a decade, when he was seriously injured and unable to continue as a soldier. It was during his convalescence that Ignatius read the lives of Christ and the saints. He was deeply moved and began a major spiritual conversion and change of life. When he was sufficiently recovered, he went to a shrine of the Blessed Virgin Mary at Montserrat and spent the next year in the nearby town of Manresa. He lived in a cave there offering prayer and penance and discerning his vocation. It was here that he began compiling his famous and still widely read Spiritual Exercises. After a pilgrimage to the Holy Land, he spent a number of years studying at various universities, including the University of Paris where he met St. Francis Xavier and others who eventually joined Ignatius at the founding members of the Society of Jesus (the Jesuits). The order, which pledged most particular loyalty to the Pope, received Church approval in 1540 with St. Ignatius as the Superior General. Most of the others and many of those who followed them as Jesuits became missionaries. Ignatius remained in Rome where he continued to guide the Jesuits as well as founding homes for orphans and other charitable institutions. He died there in 1556. Both St. Ignatius of Loyola and St. Francis Xavier were canonized on the same day in 1622.

St. Ignatius was committed to following Christ through self-denial and to dedication to serving His Church. Among his many well-known writings is a beautiful prayer called the Suscipe, which is Latin for receive: “Take, Lord and receive all my liberty, my memory, my understanding and my entire will, all I have and call my own. You have given all to me. To You, Lord, I return it. Everything is Yours; do with it what You will. Give me only Your love and Your grace, that is enough for me.”