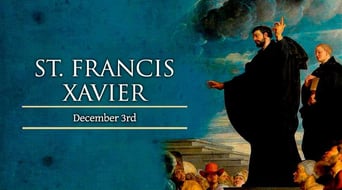 St. Francis Xavier was known for his long hours of hard work. He loved the poor and sick and showed great joy in their service. He had given his life to bringing the Good News to people who had never known Christ.

Today we honor patron of the missions, St. Francis Xavier. While the Church has sent out many good and holy missionaries into the world, Francis Xavier is generally considered the greatest after St. Paul the Apostle. Born in Navarre, Spain, in 1506, to a noble family, he eventually went to Paris to study philosophy. He began a promising academic career and tended to be focused on the things of this world. But Francis’ plans changed after he met Ignatius Loyola who guided him into more spiritual interests. In 1534 Francis Xavier became one of the founding members of the Society of Jesus (better known as the Jesuits) and was ordained two years later. Within a few years, he had set sail for India with the title of papal nuncio. He spent almost a decade bringing Christ’s message to the people of Goa, Malacca and other areas before going to Japan in 1549. After establishing a Christian community there, he returned briefly to India before setting his sights on China. However, Francis Xavier died of a fever on an island off the coast of China on this date in 1552. He was canonized in 1622.

St. Francis Xavier was known for his long hours of hard work. He loved the poor and sick and showed great joy in their service. He had given his life to bringing the Good News to people who had never known Christ. He strove to do all God asked of him, however difficult. In the Gospel for today we hear, “Jesus said to His disciples: ‘Not everyone who says to Me, ‘Lord, Lord,’ will enter the Kingdom of heaven, but only the one who does the will of My Father in heaven’” (Matthew 7:21). St. Francis Xavier did everything he could to obey Almighty God and help His people, body and soul. We, too, can make an effort to do what our Lord wants each day, for the good of others, as well as our own souls.