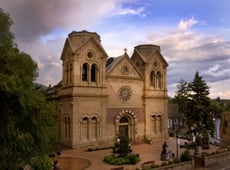 St. Francis of Assisi, followed Christ with his whole being

In time, he realized that God was calling him to a far greater task in aiding the Church in a troubled time.

Francis Bernardone, the son of a rich cloth merchant and his noble wife, was born in Assisi, Italy in 1181. His early years were given over to an active social life with, apparently, few spiritual interests. However, after he was imprisoned and taken ill while fighting as a knight, he became more serious and dedicated himself to living the life of Christ as closely as he could. He gave away all his possessions to pursue service to “Lady Poverty.” During prayer, Francis experienced the voice of Jesus telling him to “repair My house.” He took the command literally and started by fixing the fallen down church of San Damiano. Despite the mockery of many, including family, neighbors, and old friends, Francis persisted. In time, he realized that God was calling him to a far greater task in aiding the Church in a troubled time. Soon he had a handful of followers and within twelve years there were 5,000 members of the Order of Friars Minor. In his unpretentiousness, Francis himself remained a deacon, refusing Holy Orders. Along with St. Clare of Assisi, he established an order of cloistered nuns, now known as Poor Clares. Later, a third order, the Secular Franciscan Order, was founded to encourage lay people and other members of the clergy to follow this way of poverty and humility while in the world.

For the last two years of his life, St. Francis of Assisi endured the stigmata, His pain from this and other hardships including near blindness caused him great suffering. He died in 1226 and was canonized two years later. One of his best known writings is The Canticle of the Sun in which he expressed his love for our Creator and His magnificent creation: “Most High, all powerful, good Lord … Praised be You, my Lord, through all your creatures, especially through my lord Brother Sun, who brings the day; and You give light through him. … You, my Lord, through Sister Mother Earth, who sustains us and governs us. … Blessed are those who endure in peace for by You, Most High, they shall be crowned. … Praise and bless my Lord, and give Him thanks and serve Him with great humility” (Canticle of the Sun). Today he is patron of ecology.