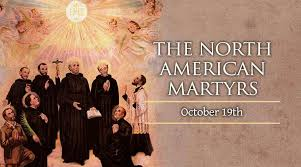 These missionaries had faced extremely difficult and dangerous circumstances in their efforts to share the Good News.

Today we honor the eight men known as the North American Martyrs.  They included six French Jesuit priests and two lay missionaries who worked among the Huron tribe in Canada and upstate New York. It was a time of intertribal warfare exacerbated by the struggles between the French settlers in Canada, and the Dutch and British in New York. Father John de Brebeuf served there the longest and wrote a dictionary and a catechism, as well as prayers and hymns in the Huron language. Father Isaac Jogues was captured and enslaved by the Iroquois in 1642 and witnessed the death of the first of the martyrs, layman Rene Goupil. A year later Father Jogues escaped with the help of the Dutch and returned to France. But he was unwilling to give up on his mission and returned just a few months later. He had to receive special permission from the Pope to say Mass since his fingers had been so badly mangled by torture. He and John de Lalande, the second lay missionary, were killed in 1646. Two years later Father Antoine Daniel followed them in death. The four remaining priests, Fathers Jean de Brebeuf, Noel Chabanel, Charles Garnier, and Gabriel Lalemant were all martyred in 1649.

These missionaries had faced extremely difficult and dangerous circumstances in their efforts to share the Good News. Yet they remained true to Christ in death as in life. In the Gospel for today, we hear Jesus end the Parable of the Rich Fool with these words: “But God said to him, ‘You fool, this night your life will be demanded of you; and the things you have prepared, to whom will they belong?’ Thus will it be for the one who stores up treasure of himself but is not rich in what matters to God” (Luke 12:20-21). The North American Martyrs clearly understood what matters to God. They willingly endured suffering and death to share the message of salvation with those who did not know our Lord, the Son of God.