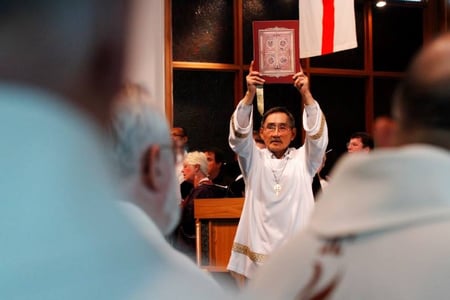 In the Gospel reading for this Sunday it seems that one minute the people listening to Him in the synagogue in Nazareth were impressed. The next minute they were trying to drive him out of town.

They start questioning His authority to associate Himself with the Messianic prophecies. So Christ answers by telling them how often God’s prophets have been rejected: “‘Amen, I say to you, no prophet is accepted in his own native place.… There were many widows in Israel in the days of Elijah when…a severe famine spread over the entire land. It was to none of these that Elijah was sent, but only to a widow in Zarephath.’… They rose up, drove Him out of the town.… But Jesus passed through the midst of them and went away” (Luke 4:24-26, 29-30).

Jesus’ neighbors could not get over the fact that He was one of them. While He was probably liked and respected as a good and decent young man, to them, He was still just the carpenter’s son. He was not from a rich or prominent family nor had He seemed outstanding in any way. Yet now, Jesus was identifying Himself with Scriptural citations about the Messiah. Moreover, He indicated that God was not sending Him to His own Jewish people but also to Gentiles. The townspeople became furious with our Lord because they were unable to understand the blessing Almighty God was giving them. Most of Jesus’ neighbors expected a Messiah who would rescue them from the Romans and any other crushing outside forces. In time, Christ would reveal Himself as far more: the Son of God come to save them all from death, from evil, even from themselves.