Feast of the Transfiguration of the Lord - August 6, 2020 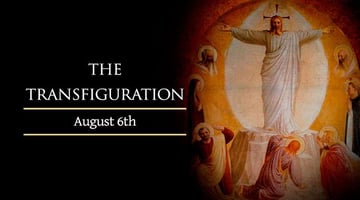 Envisioning our own transfiguration

"After six days Jesus took Peter, James, and John his brother, and led them up a high mountain by themselves.  And he was transfigured before them; his face shone like the sun and his clothes became white as light." (Matthew 17:1-3)

On this day we celebrate the feast of the Transfiguration. Our Lord wanted His followers to more deeply understand His relationship with God the Father and, through Him, their own. So He privileged three of them with seeing Him is His magnificent divinity. “Jesus took Peter, James, and his brother, John, and led them up a high mountain by themselves. And He was transfigured before them; His face shone like the sun and His clothes became white as light. And behold, Moses and Elijah appeared to them, conversing with Him” (Matthew 17:1-3). It’s hardly surprising that the Apostles’ reaction combines both joy and fear. They are joyful at the beautiful revelation of Jesus of Nazareth as the Son of God. They are fearful at the overwhelming vision of their beloved friend and teacher in company with the Moses, who brought God’s law to His people, and Elijah, one of God’s greatest prophets.

This miraculous encounter left the Apostles stunned and uncertain what to do. Peter wanted to build tents so they could stay there together. To us it seems an incredible, even a farfetched idea. They did not understand, any more than we probably would have, that Christ simply wanted them to be there with Him, recognizing Him as both truly human and truly divine. They were asked only to look, to listen, and to ponder. This was not a time for action, but for faith and prayer. Then the Apostles might grasp that Jesus gave them this unique moment not only to see Him more clearly, but also to see themselves – and all who open themselves to Him – as we are ultimately meant to be. Christ came to save us from sin and death and to share with us His glory, the glory that comes from the Father of us all.