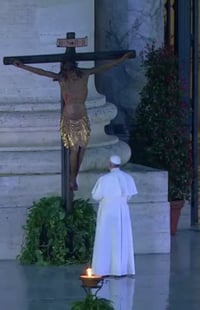 “God so loved the world that He gave His only Son”

The followers of our Lord in the early centuries of the Church knew the cross primarily as a torturous form of capital punishment employed by the Romans. Over time, they adopted it as the sign of salvation...

On this feast, we gather in exalting the Holy Cross on which Jesus died for our sins. Discarded and possibly buried to prevent Christians from finding it, it was discovered in 326 A.D. by St. Helena, the mother of the Roman Emperor Constantine who had gone to Jerusalem in hopes of finding the cross. After excavations, three were found at Calvary, presumably two held the thieves crucified with Christ. It is believed that the true cross was determined when someone who was dying was healed upon touching one of them. The Church of the Holy Sepulcher was built on the site at the order of Constantine who had already ended the persecution of Christians. The current Basilica is still the focus of pilgrimages by Christians from around the world.

The followers of our Lord in the early centuries of the Church knew the cross primarily as a torturous form of capital punishment employed by the Romans. Over time, they adopted it as the sign of salvation that the Son of God embraced in order to redeem the whole world from sin and death. In the Gospel reading today, we hear Jesus say, “No one has gone up to heaven except the one who has come down from heaven, the Son of Man. And just as Moses lifted up the serpent in the desert, so must the Son of Man be lifted up, so that everyone who believes in Him may have eternal life” (John 3:13-15). Christ reminded His listeners of a time during the 40 years that Moses led the Jewish people after escaping Egypt. They rebelled and complained bitterly against God who sent serpents to bite them. When Moses interceded, God told him to make a bronze model of the serpent and mount it on a pole and raise it for all to see. Anyone who had been bitten had only to look at the image; then, in their faith and obedience, they were saved. Christ allowed Himself to be nailed to a cross to rescue every person for the glory of eternal life with Him.