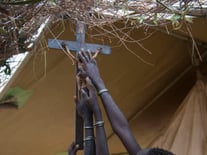 ‘Christ Jesus … humbled Himself, becoming obedient to death, even death on a cross’ (Philippians 2:6, 8)

The cross that at one time was the symbol of a cruel and ignominious death has come to be the very symbol of Christian belief.

Today we commemorate the Feast of the Exaltation of the Holy Cross, venerating the cross that held our Lord for the salvation of the world. Generally, it is believed that after Jesus’ crucifixion, it was buried someplace that His followers could not locate it, then a Roman temple was built it. In the early 4th century, when Constantine was fighting for control of the Roman Empire, it is said he had a vision of a cross with the words, “In this sign, you will conquer.” He had the image of the cross put on the soldiers’ standards and shields – and won the battle. Soon after, the persecution of Christians was ended. Later, Constantine wanted a church built on the place where Jesus died. The Emperor’s mother, St. Helena, went to Jerusalem to supervise the work. When three crosses were found, the one that held Christ was determined when a dying woman who touched it was healed. One church was built on Calvary and another on the site of the Holy Sepulcher. Many people came to show reverence for the cross. Several centuries later, the cross was stolen in a battle and, on its recovery, this date was chosen to honor it and to thank God in a special way.

The cross that at one time was the symbol of a cruel and ignominious death has come to be the very symbol of Christian belief. And the wooden beams on which the hands and feet of Jesus were nailed, have been represented in art in many ways over the centuries and around the world. They help us reflect on the mercy that the Son of God revealed when He was lifted up for our eternal redemption. As we hear in St. Paul’s letter today: “God greatly exalted Him and bestowed on Him the name that is above every name, that is the name of Jesus every knee should bend, of those in heaven and on earth and under the earth, and every tongue confess that Jesus Christ is Lord, to the glory of God the Father” (Philippines 2:9-11). We need to pay attention to the crosses and crucifixes that we see so often – and to think about our Savior’s profound love for His dear children.