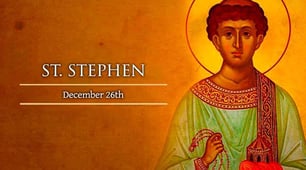 In the Gospel, we hear Jesus addressing the Apostles. He had just told them about the ministry they will be undertaking to preach about the coming of the kingdom of heaven.

On this day after Christmas, we venerate the first follower of Christ who gave up his life because of his faith. St. Stephen was a Jewish Christian whose first language was probably Greek. He was among the seven to act as deacons, particularly in caring for widows and other members of the Church in need of charitable aid. Moreover, Stephen was known as one who was filled with the Holy Spirit. He frequently spoke out and debated with those Jews who did not accept Jesus as the Son of God. They accused him of blasphemy and stoned him to death. With his dying words, in imitation of our Savior, Stephen forgave his killers. He also gave himself into the hands of Christ. This happened in about 34 A.D. and it was after his martyrdom that many of the Apostles set out from Jerusalem to spread the Good News to the larger world.

In the Gospel, we hear Jesus addressing the Apostles. He had just told them about the ministry they will be undertaking to preach about the coming of the kingdom of heaven. Then He warns them about the persecutions they will face. “When they hand you over, do not worry about how you are to speak or what you are to say. You will be given at that moment what you are to say. For it will not be you who speak but the Spirit of your Father speaking through you.… You will be hated by all because of My name, but whoever endures to the end will be saved” (Matthew 10:19-20, 22). St. Stephen, the proto-martyr for Christianity, was open to the Holy Spirit. Let us ask him to pray that we, too, will always be willing to share our faith in our Lord and Savior – no matter the consequences. He will never leave us alone. In God’s merciful love, each of us can find the courage to be the loyal person He calls us to be, wherever we are and whatever we do.