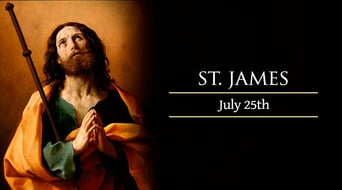 Along with the other disciples, he witnessed many miracles and heard Christ’s powerful and merciful teachings...

The saint we venerate today is James the Apostle, also known as the Greater. He was shown in the Gospels to be, like his brother John, hotheaded, arrogant and ambitious. Yet this man who labored as a fisherman on the Sea of Galilee, would become one of those closest to Jesus. After he and his brother were chosen by our Lord to follow Him, James was one of the few present at several momentous events, including the raising to life of Jairus’s daughter, the Transfiguration, and Jesus’ agony in the garden on the night He was arrested. Along with the other disciples, he witnessed many miracles and heard Christ’s powerful and merciful teachings over their three years together. Yet James and John still wanted to have fire rain down from heaven to punish a Samaritan village that would not welcome them. No wonder Jesus called them the Sons of Thunder. However, like the other Apostles, St. James was faithful to Christ after His Resurrection and Ascension. It is said that he went to Spain to preach there for a time, but returned to Jerusalem where, under the orders of King Herod, he was beheaded, probably in 44 A.D. He was the first Apostle to suffer martyrdom in the name of Christ our Savior.

Like his fellow Apostles, St. James embraced the role of missionary. He shared the message of salvation and brought as many people as he could to believe in Jesus, his Lord and his friend.  “We have the same spirit of faith, according to what is written, I believed, therefore I spoke, we too believe and therefore speak, knowing that the one who raised the Lord Jesus will raise us also and place us with you in His presence” (2 Corinthians 4:13-14). Spreading the love of our Lord in our encounters with all we meet is still a responsibility of His followers today.