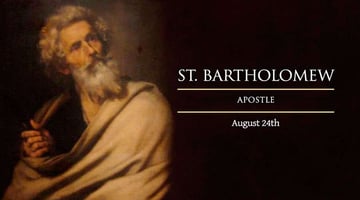 Chosen to follow Him, to spread the Good News...

Like so many of us, Bartholomew made a snap judgment based on his bias, whether personal or based on the attitudes of those around him.

This is the feast of St. Bartholomew, sometimes known as Nathanael, one of the Twelve Apostles called by Jesus. It was St. Philip who had just been selected by Christ who sought him out. “Philip found Nathanael and told him, ‘We have found the one about whom Moses wrote in the law, and also the prophets, Jesus son of Joseph, from Nazareth.’ But Nathanael said to him, ‘Can anything good come from Nazareth?’” (John 1:45-46) Like so many of us, Bartholomew made a snap judgment based on his bias, whether personal or based on the attitudes of those around him. Happily, Philip, discovered in Jesus someone worth following, someone worth turning his life upside down for, and Jesus wanted Bartholomew to know Him, too. Could anything so wonderful come from an unimportant town like Nazareth? So Philip told Bartholomew to “come and see.”

Jesus praised Bartholomew at their meeting as a good and honorable Jew, and says that He had already seen him under a fig tree. When the man was amazed, Jesus promised that he would see greater things. And He did. Bartholomew is rarely mentioned in the New Testament, but, like the other Apostles, he turned his life over to Christ. Later, he set out to preach the news of our Redeemer’s life and His gift of salvation. It is thought that he traveled as far afield as India and Armenia. It was in the latter where it is believed that he was martyred. He is considered a patron of that country.