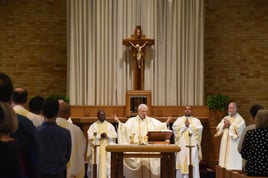 Remembering the lives and efforts of the Apostles Philip and James

On this feast we salute Saints Philip and James, two of the Apostles that Jesus called to join Him in His travels and His ministry. Philip, who came from Bethsaida, was one of the earliest chosen and possibly a friend of Saints Peter and Andrew who came from the same town. Philip is mentioned several times in Scripture, particularly in the Gospel of John. At the miracle of the multiplication of the loaves, Philip tells Jesus that even 200 days’ wages would barely feed the crowd. After His final entry into Jerusalem, some Greeks approach Philip to help them meet Jesus. James, the son of Alphaeus, was likely called the Lesser because he was younger or shorter than James the Great, the brother of St. John. He is believed to be a relative of Jesus.

After the death, Resurrection and Ascension of Christ, Saints Philip and James went on to fulfill their mission and build the early Church. Philip preached in Greek-speaking communities and was probably martyred in what is now Turkey. James stayed in Jerusalem where he was a key part of the Christian community, becoming the first bishop of the city. He was stoned to death there around 62 A.D. These Apostles, like the others who loved and served our Redeemer, shared the Good News to all who would open their ears to hear and their hearts to believe. In the first reading for this day, we hear from St. Paul who was spreading the message of salvation at the same time as Philip and James. “I am reminding you, brothers and sisters, of the Gospel I preached to you, which you indeed received and in which you also stand. Through it you are also being saved, if you hold fast to the word I preached to you” (1 Corinthians 15:1-2). All these Apostles who were so close to Jesus finally understood the astounding significance of all He had asked them to take on faith years before. Through their work and that of other early disciples, the Church of our Lord began to travel around the world. Now, walking in their footsteps, today’s missionaries introduce more people to Christ’s life and love.