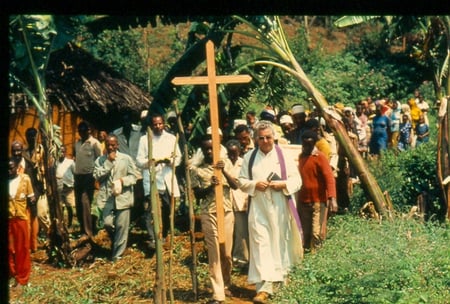 Before He could be raised from the dead, our Redeemer first had to be raised up on the Cross

The cross upon which Jesus died was lost until St. Helena, the mother of Emperor Constantine, went to Jerusalem to find it in 326 A.D.

Tradition says that three crosses were found. But when a dying woman touched one and was healed, that one was declared the Holy Cross. The Church of the Holy Sepulcher was built on the location and the date of its dedication on September 14 was later chosen for this feast day.

Today’s Gospel refers to an incident recounted in the first reading when the Jews who had been rescued from Egypt were still making their way through the desert. They complained bitterly about their sufferings and God sent snakes to punish them, only relenting when they admitted their sin. “No one has gone up to heaven except the one who has come down from heaven, the Son of Man. And just as Moses lifted up the serpent in the desert, so must the Son of Man be lifted up, so that everyone who believes in Him may have eternal life” (John 3:13-15). The cross that bore Christ’s body is certainly worthy of contemplation and veneration. However, it is the death of the Son of God for the salvation of our souls that truly matters. The cross was the altar, Jesus the sacrifice, and all who believe are the beneficiaries of His indescribable mercy. Let us ask our Lord to grant us a greater appreciation of His love us – and a deeper desire to return His love with our own.