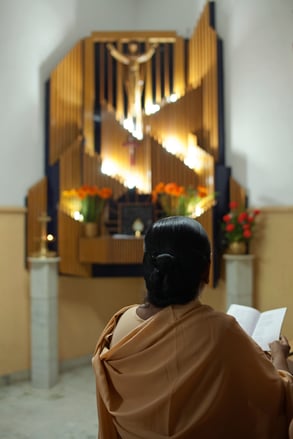 Christ as priority in life

On His final journey to Jerusalem, Jesus and His disciples went to a Samaritan village where they are not welcomed.

Even though the Apostles want to discipline – even destroy – the villagers, Jesus admonished His followers and led them to another town. Our Lord was far more interested in spreading His message of hope to those who would listen than in punishing those who were already punishing themselves by rejecting Him, even though they did not realize it. As they continued on their way, Christ met three men who said they wanted to follow Him. Yet each one found some stumbling block that prevented them. “And another said, ‘I will follow you, Lord, but first let me say farewell to my family at home.’ To him Jesus said, ‘No one who sets a hand to the plow and looks to what was left behind is fit for the kingdom of God’” (Luke 9:61-62).

Our Lord surely expects everyone who follows Him to take responsibilities to home and family seriously. However, He wants all of us grasp the profound necessity of putting Him first. Nothing and no one must come between Christ and us. And just as He never allowed anything to interfere with His obedience to the will of God, neither can we. Jesus’ disciples – those who believed in Him two thousand years ago and all who do now – need to willingly give our whole being in service to our God. Jesus was on His way to suffer and die for us. And Christians need to do the same for Him if He asks it of us. He offers us the kingdom of God and we have to be prepared for all that means.