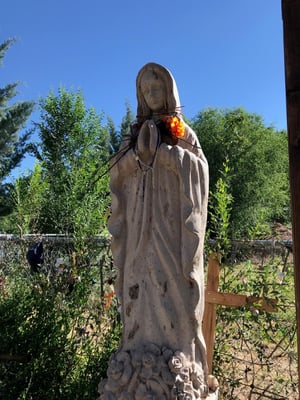 On this day honoring St. Maximilian Kolbe, consider a vision he had of the Blessed Virgin while he was still a child.

She held out a white crown of purity and a red crown of martyrdom. He told her, “I choose both.” His life reflected the closeness he always felt to Mary and, in time, he would indeed claim both crowns. Born in Poland, he entered the Franciscan order at age 16. In order to draw as many men and women into a more ardent faith, he used religious magazines and other print material. One in particular, called Knight of the Immaculata, reached a circulation of a million subscribers. Father Kolbe spent his whole priestly ministry in striving to bring all people to God. “If a man has a hundred sheep and one of them goes astray, will he not leave the ninety-nine in the hills and go in search of the stray? And if he finds it, amen, I say to you, he rejoices more over it than over the ninety-nine that did not stray” (Matthew 18:12-13).

Then World War II turned the whole world upside down. Arrested and sent to the infamous Auschwitz concentration camp, this loyal priest would earn the crown of martyrdom. He volunteered to die in the place of a family man who was one of 10 prisoners condemned to the starvation cell because someone had escaped. When he was the only one left, the Nazis used a hypodermic needle filled with poison to kill him. Today this courageous and pious man is recognized as a patron of those addicted to drugs.

Suggested missionary action: Even though it is not Lent, we can fast for a day in thanksgiving to God for His many blessings to us. We can also help the hungry through a parish or local food pantry or soup kitchen.