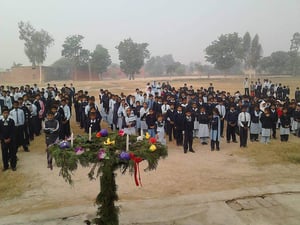 Turn yourself over to God, and He will take you where you could never have imagined

As missionary, evangelist, theologian, St. Paul gave all the rest of his days to the will of God...

As we celebrate this feast of the Conversion of St. Paul, we hear his description of what happened to him as it is recounted in the Acts of the Apostles. Originally known as Saul, he was raised and educated strictly in accordance with Jewish law and tradition. Although he did not know Jesus, he came to despise the early followers of Christ. He saw them as opposing and damaging his ancestral beliefs in defiance of Almighty God. Saul was eager to persecute Christians and deliver them up for punishment. When the chief priest and elders sent him to arrest these followers of Jesus in Damascus, he willingly set off, not knowing how his own life and the lives of countless others would change. Blinded by a great light, Saul heard the voice of Jesus ask him “why are you persecuting Me?” Saul asked what he should do and our Lord sent him to Damascus where he would learn everything that was appointed for him. There he met Ananias, a Jew who had become a Christian, who helped Saul regain his sight. “Then he said, ‘The God of our ancestors designated you to know His will, to see the Righteous One, and to hear the sound of His voice; for you will be His witness before all to what you have seen and heard. Now why delay? Get up and have yourself baptized and your sins washed away, calling upon His name’” (Acts 22:14-16).

So Paul who had tried to destroy the Church became one of its chief defenders, sharing the Good News with Jews and, particularly, Gentiles. Not only through his peaching, but also the many letters, or epistles, that he wrote to individuals and early Christian communities, he built up the Church of Christ. His efforts still echo to the present. As missionary, evangelist, theologian, St. Paul gave all the rest of his days to the will of God and the service of His people. He endured much danger and hardship, but always while knowing that the cross of Christ is triumphant.

Suggested missionary action: We can honor St. Paul by assisting today’s missionaries and those they help through our prayers, especially the World Mission Rosary. We can also offer our material support for those working today in the Pope’s missions.