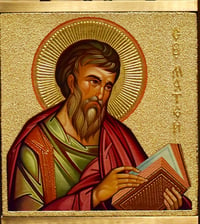 Today we celebrate the feast of St. Matthew, one of the original Twelve Apostles selected by Jesus to accompany Him

Certainly all those who followed Christ must also have recognized their own personal failings and faults.

St. Matthew was one of the Twelve improbable men called by Jesus to journey with Him in His mission to the world. However, Matthew was singular in that his own Jewish people considered him a collaborator with the enemy. He collected taxes for the Roman oppressors who had taken over their land. So he would have been both despised and feared. As such a public sinner, Matthew would have lived on the margins of his own society. But one day while he sat at his station to take taxes in the town of Capernaum, Jesus simply said, “Follow Me.” And Matthew did, and stayed with Him during His whole ministry. The other Apostles and disciples must have been uncomfortable at first with someone they would normally avoid and look down on. But Jesus chose him and that was enough. Certainly all those who followed Christ must also have recognized their own personal failings and faults.

In the First Reading today, we hear St. Paul remind the Christians that each one of us must make an effort to act in a way that is worthy of our calling as followers of the Son of God – and that each of us has a special role to play in the divine plan. “Grace was given to each of us according to the measure of Christ’s gift.… And He gave some as Apostles, others as prophets, others as evangelist, others as pastors and teachers, to equip the holy one for the work of ministry, for building up the Body of Christ” (Ephesians 4:7, 11-12). St. Matthew was meant to be an Apostle. While he is also thought by many to have written one of the Gospels, there is some doubt about his authorship. Nonetheless, St. Matthew went on to spread the Good News, probably in Judea first. Later, he may have traveled to Ethiopia where it is thought that he laid down his life for believing in Christ.

Suggested missionary action:  Let us pray to St. Matthew to help us gain a better understanding and appreciation of the New Testament, especially the Gospels. And we can also make an effort to read from Scripture regularly, perhaps a chapter each day.