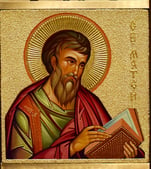 Matthew freely said “Yes!” to the one who would save him and the rest of the world

"As Jesus passed on from there, he saw a man named Matthew sitting at the customs post. He said to him, “Follow me.” And he got up and followed him." (Matthew 9:9)

On this feast of St. Matthew, we honor one of the Twelve Apostles called by Jesus to be His closest disciples who would start the work of spreading His Church to the ends of the earth. But on this day when Christ returned to Capernaum, the town He had made His home-base during His ministry, the tax collector and Roman collaborator was in for a shock. “As Jesus passed by, He saw a man named Matthew sitting at the customs post. He said to him, ‘Follow Me.’ And he got up and followed Him. While He was at table in his house, many tax collectors and sinners came and sat with Jesus and His disciples” (Matthew 9:9-10). Matthew himself may not have understood exactly why He did get up and follow Jesus, why he gave up his old life, old ways, and old sins, to do what Jesus said: follow Him. Perhaps they had seen each other before, perhaps they were strangers. But, either way, Jesus knew He wanted this man for His own. And, like the rest of the Twelve, Matthew freely said “Yes!” to the one who would save him and the rest of the world as well.

The first of the Gospels is attributed to Matthew by tradition, although current scholarship does not generally agree with this. We learn almost nothing more about his life in the Bible. However, after the Ascension of Christ and the descent of the Holy Spirit, Matthew, along with his fellow Apostles, began to preach the message of salvation, first to other Jews, and then elsewhere. According to custom, he eventually went to Ethiopia where he was martyred as he labored to share Christ with others. Today St. Matthew is the patron saint of accountants, bookkeepers, bankers, and, of course, tax collectors.

Suggested missionary action: Let us pray to St. Matthew, asking his help and protection for all the Church’s missionaries. We can particularly seek his help for the welfare of the Pontifical Mission Societies and all they assist, both body and soul.