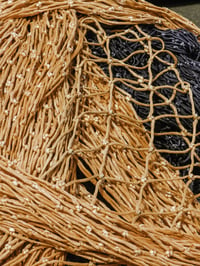 “How beautiful are the feet of those who bring the good news!”

St. Andrew was crucified on an “X”-shaped cross about the year 60 A.D. In addition to being the patron of a number of countries, St. Andrew is also patron of fishermen.

In the Gospel for this feast honoring St. Andrew we hear how Christ chose him for His service. “As Jesus was walking by the Sea of Galilee, He saw two brothers, Simon who is called Peter, and his brother Andrew, casting a net into the sea; they were fishermen. He said to them, ‘Come after Me, and I will make you fishers of men’” (Matthew 4:18-19). In the Gospel according to St. John, we learn that Andrew had been a follower of St. John the Baptist, but with encouragement from the Baptist, he eagerly turned to Jesus. Unlike his much more prominent brother, Andrew is rarely singled out in Scripture. We do know that he told Jesus about the boy who had the loaves and fishes at the miracle of their multiplication. And, when some Gentiles who were in Jerusalem before the Passover feast, they asked St. Philip to introduce them to Jesus. But Philip went to Andrew first and they both approached Christ who then spoke about His imminent death and glorification.

When it was time for the Apostles to set out on their missionary journeys, Andrew may have gone as far as Russia. He is certainly believed to have preached in what are now Turkey and Greece. In the city of Patras, in Greece, St. Andrew was crucified on an “X”-shaped cross about the year 60 A.D. In addition to being the patron of a number of countries, St. Andrew is also patron of fishermen. We venerate him as one of the chosen followers of our Redeemer who gave his life to communicate the Good News of salvation and who would ultimately die in his efforts to introduce Christ to the world.

Suggested missionary action: We can pray to St. Andrew to protect the Church’s missionaries today and to guide their faithful efforts at spreading the Good News wherever they go.

Add #justonemore to your gift-giving list this Christmas with MISSIO.