Yes, Virginia, there are missionaries...

Yes, Virginia, there is a Santa Claus.... If you are not familiar with this quote, it is from a letter that was written by The New York Sun back in 1897 in response to eight-year-old Virginia O’Hanlon, who was questioning if there really is a Santa Claus. Many children throughout the world believe in Santa Claus, identifying him as St. Nicholas. Being a kind and generous man, St. Nicholas would give gifts to the poor, leaving them in stockings hung by the fireplace! Today, there are many children in our world who don’t receive material gifts at Christmas. These children would tell you that they receive the greatest gift of all, the gift of “life.” To wake up and live another day, even with their sufferings, is considered to be a gift, a blessing. And they would add that the missionaries there with them are blessings as well.

"The missionary is here…. the missionary is here." Those are the sounds I heard traveling through the village during my first mission trip to Nigeria, which took place during the Christmas Season. Children were running next to the car, giggling, cheering, with excitement and anticipation, anxiously awaiting to see what gifts the visiting missionary would bring them. I had many gifts that were donated from faithful parishioners throughout the Allentown, Pennsylvania, Diocese. It was while I worried about how to choose - there wasn't enough gifts for every child - that a Sister offered me a glimpse of a special blessing I was soon to receive. The Sister said to me, “It is said that when our loving attention meets the sorrow and suffering of the people, your heart will begin to quiver.”  I experienced such a quivering of my heart, especially when I met little “Ngozi,” which means “blessing” in Igbo, the local language. She was suffering from burns caused by accidentally tipping over the cooking pot of hot water onto herself. The only gift her parents wanted for her were prayers of hope and healing. I joined my prayers to theirs, an encounter I'll never forget. But there was more to come. 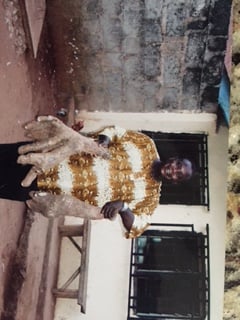 On Christmas Day, villagers come to church with grateful hearts, praising God for all he has done. They come bearing tidings of good things for their blessings, another day of life, even with its sufferings and sorrows. Bringing chickens, goats, cattle, yams (see photo right) or whatever they have for their offering, then receiving a final blessing with “Holy Water.”  This is done with a squirt bottle! I found it very refreshing considering it was a  5 ½ hour Mass which had a one-hour homily, in 100+ degrees, and no air conditioning. Before the dismissal at Mass, the priest made a joyous announcement that there was a new birth in the village, a baby girl. He wanted all to pray for the name she was to be given.

Weeks later as I was ready to depart for home, I was invited to the rectory for a farewell dinner. To my surprise the new baby girl was there with her family.  They wanted me to know the name God chose for their daughter: Holly, which they decided meant “missionary with hope.” While I was there just for a few days, I thought how beautiful the image reflected the missionaries who, day in and day out, years upon years, live out their lives in solidarity with the suffering, especially children and their families. I thought what a blessing they are for the communities in which they live and serve, and what a gift it was for me to experience that. That gift was greater than all the gifts I had brought with me in my own St. Nicholas “sack” that mission visit.

As I prepare to celebrate Christmas this year, I remember the gifts I received that year, blessings that remain with me. I share the stories with others, as with you here. Yes, there are missionaries - and thank the Lord for them.

I am dedicating this blog to the loving memory of Father Arkad Biczak. Father Biczak was a blessing to the Archdiocese of Santa Fe, New Mexico, where he served as Director of the Pontifical Mission Societies. Father Biczak had a great passion to bring the Gospel to the Santa Fe Native American culture, and to raise support, both prayerful and financial, for the work of missionaries around the world. 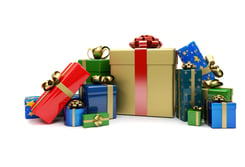 How many gifts should a child receive at Christmas? There's debate on the subject, and even what it means for the attitudes and behavior of children for the remainder of the year. No matter how many gifts you may purchase for the children in your lives this year, the Missionary Childhood Association asks you to give #justonemore - one more for a child in the Pope's missions.