The Word This Lent... 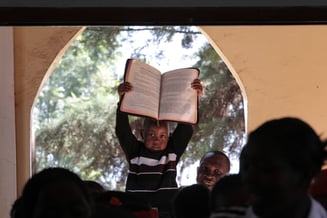 “And how can people preach unless they are sent? As it is written, ‘How beautiful are the feet of those who bring (the) good news!’” (Romans 10:15).

Missionaries from around the world have many stories to tell – joyful events, as well as sad, even fearful times. Here’s a story from my missionary service that happened one Holy Thursday that reminds us of the power of words – and the Word.

Prior to my second mission journey to Nigeria, the news was rapidly spreading throughout the Diocese of Allentown, Pennsylvania, that I would be embarking on yet another mission trip. As my mission trips were post the 9/11 terrorist attacks, there were many concerns for my safety. Traveling independently is never an easy task, especially when it comes to the missions. My plan for that trip was to arrive in the southern part of Nigeria while personally carrying material donations. Of course, not every trip goes according to plan.

My flight was supposed to arrive in Port Harcourt, Nigeria. Here I would meet a Catholic priest who would accompany me on the rest of my journey, so that I would not be traveling alone. To my dismay, I found out that there was a fire at that airport. This meant that I would be rerouted and would no longer be landing at the originally planned airport. This change left me, and the priest who was to meet me, concerned.

Instead I would land in the capital city of Abuja, Nigeria, a predominantly Muslim part of the country. I was supposed to spend two days in Abuja and then board a Nigerian domestic flight to the Owerri airport in southern Nigeria (my final destination). My accommodations for those two days were supposed to be provided by the sister of a Catholic priest. She was a resident of Abuja, Nigeria, and worked for the Red Cross.

The authorities in this area were extremely strict and would not allow this woman inside of the airport to greet me. As I arrived, with eight army duffel bags full of material donations, I was attempting to prepare myself to deal with whatever difficulty was ahead. As I walked off of the plane, there were four Muslim military officials waiting to search both me and my duffel bags. Three men and one woman stood in uniform, holding their weapons, and focusing their eyes on the Catholic crucifix which hung around my neck. At this moment, I knew that my fate was in God's hands.

First, the female official performed a body search. After that, it was time for the three men to search my duffel bags. They came across the bags that were full of medicine, which prompted many questions. I had to explain in great detail why I was bringing medicine into their country. After hearing my reasoning, one of the male officials suggested keeping the medicines for himself, instead of allowing me to take this medication to the children in need. I knew at that moment that I needed to be strong and fight for those children. Without much thought, I challenged this man and explained again that this medication was for the sick children in the southern part of the country. Of course, things only worsened from here.

Much to my surprise, the donated medication had passed its expiration date. I learned next that entering Nigeria with expired medication was a serious crime. I was thousands of miles away from home, alone, and now being threatened with incarceration. All that I could do was ask God for help.

Two of the male officers were preparing to escort me away and all that I could focus on were the chills that ran up and down my spine. As I was preparing to accept defeat, saddened that I had let those children down, another female officer instructed these men to release me. I remember the words spilling out of my mouth as I said, "Thank you, Jesus.”

At that moment, I did not know why that female officer released me that day. Maybe she was the officer in charge of the four who had searched me? I wanted to think that I moved her spirit towards compassion for the poor of her own country. Regardless of the reasoning, I was beyond grateful for that woman.

This all took place during Lent, on Holy Thursday. That evening I attended Mass and offered to assist the priest in the reenactment of the washing of the feet for the children of this Nigerian parish. For me, this was merely a small act to thank God for coming to my aid earlier that day. Dozens of children lined up to have their feet washed that night, and as I came to the last three children, I could not help but notice their mother was standing next to them.

I looked up at this woman, and although her face was covered, I felt as if she was smiling at me through her eyes. As I washed her children’s feet, I kept thinking to myself just how familiar those eyes were. After completing the washing of their feet, I moved down the line to the very last person, this woman. I washed her feet as well.

This was the only adult who had their feet washed by me that night. It was my way of giving back to her, because as I was washing the feet of her three children, I realized just why her eyes had looked so familiar. This was the female officer who had released me earlier that day.

After I had washed her feet, I looked up at this woman once more, asking her why she had let me go. She answered, “It was the words that you had spoken about your God that prompted my curiosity to enter into the Catholic Church tonight.”

Yes, how beautiful are the feet of those who hear the Good News.

"What to give up for Lent in 2020 (that isn't chocolate)." That was the headline of a recent article in an Atlanta online news publication that advocated giving up negativity and single-use plastics, as examples. This Lent, with whatever you're "giving up" perhaps consider "lifting up" in prayer and financial help your brothers and sisters in the Pope's missions. Meet them on MISSIO.