Here in the Northeast, there are birds chirping, scents of flowers blooming, trees budding, the dominating earthy fragrance after a rain shower, the wonderful evocative odor of newly mown grass. Full of freshness, these fragrances bring me back to a mission journey I took thousands of miles away, deep in the bush in the country of Uganda in Africa. A country full of  green tropical jungles, with the beauty of Lake Victoria, source of the Nile River, Queen Elizabeth National Park, the Equator, and yes, gorillas. However, the one place that I hold close to my heart is Namagongo, the most spiritual sacred place in all of Uganda. This is the land where the Ugandan Martyrs were burned alive for their love of Christ.

My journey for that mission visit was planned by Father Paul Gagawalla of the Apostles of Jesus. I was to travel to Uganda where I would be working side by side with Sisters serving impoverished people in villages and slums. This is where I have felt my true calling. Since the trip was at the beginning of June, Father Paul had planned for me to leave the Ongata Rongi slum area where I was staying and go to Namagongo for a few days. I was to stay with the Evangelizing  Sisters of Mary so I could attend the celebration of the Uganda Martyrs. Little did I know the spiritual journey I was about to embrace. 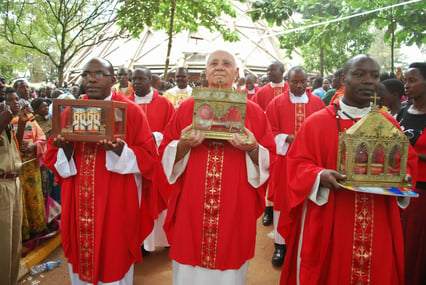 Carrying the relics of the Uganda Martyrs

Every year on June 3, the Christian faithful take a pilgrimage to Namagongo to show their respect for the Uganda Martyrs. A group of Roman Catholics, and Anglicans, who were executed in 1886 during the persecution of Christians under the ruler of King Mwanga. Twenty-two of them were Roman Catholic, including Charles Lwanga and his companions. The youngest “Kizito” was only 14. They were marched to Namagongo, where they were bound with ropes, shackles, iron rings, and slave yokes. They were forced to wait a week until their execution. During that time, the martyrs prayed and sang hymns; the Catholics among them recited morning and evening prayers. On June 3 they were killed.

Over a million Catholic pilgrims from around the world gather for the Uganda Martyrs Day. Men, women and children,  walking hundreds of miles barefoot from neighboring countries, as a demonstration of their faith. At times taking weeks to arrive for the Martyrs Remembrance Day. People believe that God comes down from heaven, and walks on foot with pilgrims to protect them, until they reach Namugongo to honor the Martyrs. Pilgrims camp out on the sacred grounds with no facilities, in sweltering heat and difficult conditions. But this does not lessen the passion that they feel. Those not from Uganda who attend sign a book, stating what country they represent. When I was escorted to the tent, I was the only person from the United States of America that had signed in at that time. (Although it was early morning, so there might have been other Americans who arrived after me.)

Attending the celebration, I was in the company of Sister Clemencia Butetsi of the Evangelizing Sisters of Mary. We arrived early in the morning, at  6 AM; thousands had already been there for a few days. We knew it would be difficult to get a good viewing area and that it would be a long hot day. I had to go the entire day without water and food because there wasn’t any indoor facilities for me to use. With temperatures around 100 degrees, all I could do was pray for a day of praise without experiencing any health difficulties. 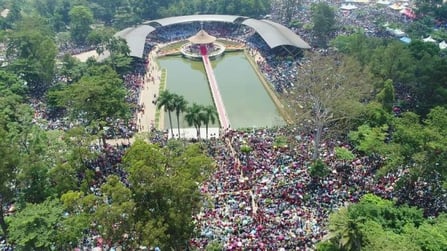 Site of the annual Mass for the Uganda Martyrs

Our first stop was to the shrine to venerate their sacred relics. From there Sister Clemencia would lead me to a large park and pond, the site of the annual  Mass. The pond area is where pilgrims wash and drink water, regarding it as a holy source, because it is the place where the executioners washed the martyrs’ blood off their hands. As we were walking towards our viewing area, Sister Clemencia was approached by a man wearing all black. We were then seated in a  covered section (most of the area is open with no protection from the elements) with dignitaries including the Ugandan President, Yoweri Museveni. Not being seated directly in the sun, and having facilities that I was able to use, was a blessing. I later found out the man in black was a Ugandan Secret Service Agent. I never questioned why or how I was able to be seated there. God knew, and I was so grateful.

The feast day, being a national holiday, lasts five to six hours. As the long procession begins, it includes considerable singing and dancing in traditional styles. With the Holy Martyrs Choir singing songs of praise and worship, it makes one feel it could be heard up to heaven. Holy Relics were presented with incense and palms, as people representing various countries carried their flags. When it is time for the gifts to be brought forward, it becomes very extensive, including foods, vestments and a wide variety of other gifts being brought by large diocesan groups.

Seated next to me was a young boy named  “Kizito.” Every year a young Ugandan  boy is picked to represent the youngest Martyr. Throughout my mission work in Uganda, I've met many young men with that same name. I never realized the true meaning behind it, until I attended the Martyrs Mass. 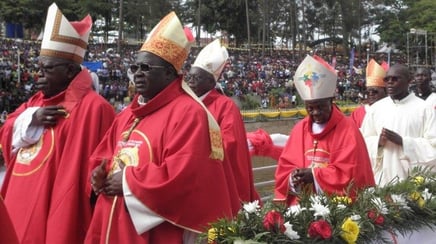 My friend, Archbishop Emmanuel Obbo of Tororo, Uganda, in procession for the annual Mass

As the procession ended, after hours of blazing hot sun, the sky opened up with a torrential downpour. Millions of Africans began to chant and dance, almost as if they were in touch with the spirits of those who suffered from Martyrdom. They say, “it rains every year right after the Uganda Martyrs Celebration.” The rains, they say, are the “Martyrs Tears,” filling the lake. The grounds of Namagongo are a sacred reminder of the love the Martyrs had for Christ. 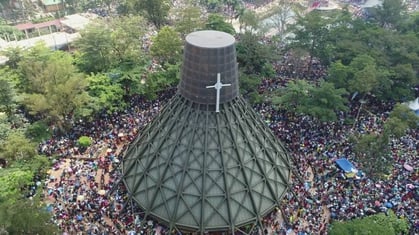 "Martyrdom" of sorts continues throughout Uganda and Africa today, particularly among children who have lost their families, and homes due to illness or war. They remain in dire need of food, water, healthcare, a home and education. Children from the United States and around the world walk with these little ones, with their prayers and through their sacrifices to the Missionary Childhood Association. "Children helping children," a part of the freshness of hope and new life... just like the sights and sounds of a summer day.

Who in the world is hungry?! 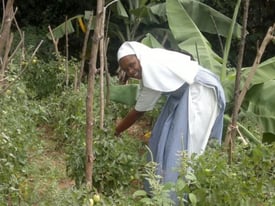 According to one report published near the end of last year, the world's 10 hungriest countries include the Central African Republic, Zambia, Madagascar, Sierra Leone, Haiti, Timor-Leste, Chad, and Sudan ~ all countries served by the Mission Church.

And missionaries ~ like this Sister in Kenya ~ are trying to do something about that situation. Want to find out how? MISSIO has all the information you need, whether it's about food and nutrition programs or farming.

Browse the projects on MISSIO and find the places ~ and faces ~ where project leaders are trying to turn the statistics on hunger in those countries around. Perhaps you could join them in their efforts with a prayer ~ or a donation.