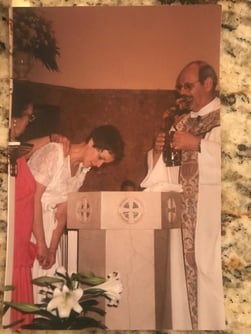 Last year, more than 37,000 people were welcomed into the Catholic Church in the United States at Easter Vigil Masses. This year, that joyous moment was postponed due to the ongoing pandemic of COVID-19. That fact gave way to reflection for me, as I thought back on that personal experience in my life 21 years ago, and about all it meant and continues to mean for me.

The Paschal Season surrounding Easter, marking Jesus’ death, resurrection, and ascension into heaven, are the holiest days of the Christian year. This is a time when we reflect on the origins of the Easter season, and the beginning of Christianity itself. This is a period of renewal, when those sacred events are reenacted.

The Easter Triduum begins each year on Holy Thursday and is carried through until Easter Sunday. Each year on Holy Saturday, at the Easter Vigil, thousands are baptized into the Catholic Church. They are welcomed into this family through the Rite of Christian Initiation of Adults, commonly referred to as the R.C.I.A. This process has several distinct stages, including inquiry, catechumenate, purification and preparation, initiation, and mystagogy.

I personally had a limited spiritual background and was excited, yet anxious, when I made the decision to enter into the Catholic Church. I was about to embark on an eight-month journey which would be my most divine and rewarding experience yet. Since I was not baptized, I would go through the rite of acceptance. This is when I would transition from an inquirer to a catechumen.

Since I was to be baptized at the Easter Vigil, I would need someone who was Roman Catholic to serve as my godparent. To me, this meant finding someone of tremendous and spiritual importance in my life. My only question was, “Who would God choose for me?” I later came to realize that God had already hand picked that person. In fact, she lived just two doors down from me. Soon she would be a neighbor, turned friend – and on April 3, 1999 – turned godmother.

Through the grace of God, I was able to participate in the entire eight-month journey with my godmother by my side. Together, we did not miss one class or Sunday Mass. I was full of zeal, ready to become a Roman Catholic, and receive Jesus in the Holy Eucharist for the first time.

The night of the Rite of Election, which marks the beginning of the final period of preparation prior to receiving the Sacraments of initiation, I could feel my anticipation and excitement growing. That night I approached the altar, with my soon to be godmother’s hand on my shoulder, and for the first time I could feel the presence of the Holy Spirit overcome me as I signed the Book of the Elect.

Finally, Holy Week had arrived! On Holy Thursday, I watched as the priest reenacted the washing of the feet. I remember listening to the choir sing “As I have done for you,” and I found it almost difficult to hold back the tears that were building up in my eyes. This still remains my favorite part of our Easter preparation in the Catholic Church.

Good Friday had passed, with an equally as moving ceremony, and finally Holy Saturday had arrived. At the 1999 Easter Vigil, in St. Anne’s Roman Catholic Church of Bethlehem, Pennsylvania, I was baptized by Father Richard W. Campo. I additionally received the Sacraments of Confirmation and Holy Communion. Upon receipt of these three Sacraments, I was officially in full communion with the Roman Catholic Church.

When we are baptized, we are all called to be missionaries. On that evening of April 3, 1999, little did I know that years later I would answer His call. I would go on to serve in the Catholic missions throughout Africa, and literally live out the phrase, “Baptized and sent.”

This year, during this difficult time in our world, let us especially remember those who still await that entrance into the Church, whenever that may be. And this year, my first celebrating Easter without my godmother, let us remember in prayer all who accompany us on our ongoing journey of faith – and our continuing path to His hope. 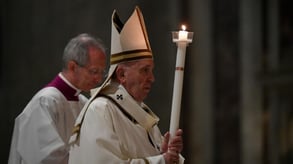 In his message at the Easter Vigil in this extraordinary year for us all, Pope Francis stated: "Tonight we acquire a fundamental right that can never be taken away from us: the right to hope." Read the Pope's full homily at this link, and learn how to extend hope to the Pope's missions during this pandemic below.