A pair of sandals and a peaceful heart

Summer is in full swing in the eastern part of Pennsylvania. The sweltering heat from the sun is radiating down onto the concrete causing illusions of wavering images as it reflects off the street. I recently noticed, as I was leaving my parish's rectory, that this heat was causing the energy and excitement that filled the children who were participating in Vacation Bible School to decrease. With their outdoor activities being limited due to the muggy conditions, the children were being sent indoors to continue their activities in an air conditioned gym. While observing the children out on the school playground in the summer heat, getting tired and looking for someplace cooler or a drink of water, my mind flashed back to a time when I was in Nigeria and was given the opportunity to participate in a Vacation Bible School session. This session was being held in a village, located in Igbo land, in the southern part of Nigeria.

Nigeria has the largest economy and most populated country in all of the African continent. Nigeria is also has the highest rate of "extreme poverty."  Missionaries there reach out to the poor here, offering practical care and the witness of God's great love. At Vacation Bible School (VBS) sessions throughout their summer months, they offer the most vulnerable here ~ the children ~ this help and hope. 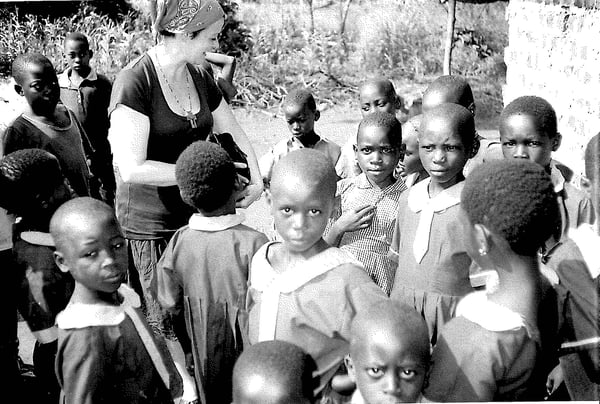 The year that I volunteered, there were more than 450 children from one village who were a part of the VBS. With temperatures averaging 100 to 110 degrees, we were blessed to have a building that had a grass roof which protected most of the children from the elements. There were no walls, a floor that consisted of dirt, no desks or seats, and no electricity. The building was not big enough to provide shelter for all of the children, making it difficult to decide who would be under the roof. With the sun making the ground very hot, those who did not have shoes were left in extreme discomfort.

I can clearly remember observing the children moving back and forth, trying to balance on one foot at a time to ease the pain from the heat. One little girl approached me, tugging on my skirt with tears in her eyes, and began speaking to me in Igbo. I could not understand what she was saying so I had asked a religious Sister present to translate for me. The Sister told me that the girl was excited about VBS, but her feet were burning terribly. She was asking permission to go to the river and put her feet in the water to cool them off. After this translation, I could not help but to take off my sandals and place them on her little feet. The excitement on her face was indescribable. I then watched her walk around showing off and sharing with her friends, what I had thought were dirty old sandals, but what she saw as shoes that were priceless.

Being part of VBS in Africa and in the United States, I had some observations. U.S. children are excited and enjoy participating in VBS, spending some additional time with their school friends, while learning more about their faith. In Africa, the children see their participation as a blessing from God Himself. In Africa, the children expressed excitement about the materials which were typically donated by missionaries and religious groups ~ and, at times, mission supporters here at home. 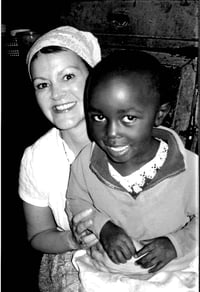 While the conditions were often unbearable throughout the summer months in Africa, the children were never phased. I remember Mass on the last day of the two-week VBS, and listening closely to the beautiful blessing given just before sending the children on their way home. I watched as all of the children ran back to their village homes. And I saw my friend, that one little girl doing who was doing her best to run in sandals that were much too big for her. My heart was a peace, knowing that the little girl no longer had tears in her eyes. As her time at VBS, came to an end, ironically, those tears ended up in my eyes.

Recalling this time in Africa, I offer up a prayer for those blessed with much, and seek blessings on those who have little, during all the seasons of the year. And I gave prayerful thanks as well for our faith, which unites us whether we're at VBS in Pennsylvania or in Nigeria. Blessings on all of you as summer continues!

Why are shoes so important? 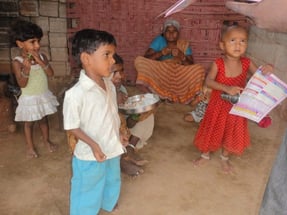 The answers to the question above found on the Quora question-and-answer website offered answers like: "Shoes are important because feet are how we get around"; "Wearing shoes protects you from germs", and even, "A new pair of shoes can cheer you up."

The gift of a pair of shoes, especially to a child in the Pope's missions, should never be underrated. In line with that "cheering up" sentiment, such a gift gives these little ones comfort, joy, and dignity. Wearing a pair of shoes boosts their self esteem, gives them confidence, and increases their physical activity. These shoes improve their behavior and increase their school attendance.

Want to leave your “footprint” of positive change in a child’s life half a world away? MISSIO has numerous projects where children are in need of shoes, clothing, and school uniforms. These children are also in need of school buildings ~ with roofs, floors, walls, and desks.

In Nalgonda, India, Father Peddineni Arogyaswamy and a few volunteers travel to nearby villages each week to provide basic education and faith formation. Without no school buildings in these areas, Father Peddineni rents a small hut to conduct his classes.

Take a virtual "walk" through such projects on MISSIO ~ and put your best foot forward!